Just a Quick post before I do some painting. In this batch I am painting more not only painting my second rifle platoon, but also the bazooka teams for each platoon, my Company Commander and Second in Command. What makes this batch a bit ambitious is that I am aiming to have it done before Sunday giving me tonight, Friday and Saturday to finish them off.

I started this batch on Monday, so far I have done the base coating on the boots, pants, jackets and skin. Leaving me to do the base coating on weapons, helmets and webbing before I get on to highlighting the lot of it. At this point I know I am going to be a pushing it to get them all done, but its do able.

My normal work flow with painting is to base coat a color and highlight it immediately, but with the number of small mistakes I made with the fist platoon when base coating on parts of the model I had already highlighted. So this time I am doing all the base contain first and highlights second. When highlighting I am much neater so hopefully wont end up having to do so much patch up work. That is it for now, tomorrow I may make a post about the army variations I am considering. Any way later.

It’s been way to long since I have made a post at all letter lone one for my painting, but it does not mean I have not done some painting! I will be making some more posts over this week talking about the changes I am making to my army and some stuff on the next platoon I am going to be painting. For now the Platoon I have finished!

This one was taken after I had base coated every thing other than the gun metal.

Before I went on my base coating frenzy I had already highlighted the pants. After I did the jackets and a some what subtle highlight on them I wanted to get all the other base colors on them so I could get a better idea of how they would look finished. What had me concerned was how light and bright the jackets where looking in comparison to the unpainted parts on the miniatures. After I had painted the other colors on them I was much happier with how the jackets where looking.

Nearly ready to varnish, just need to paint the metal.

I was really happy with out they are coming along at this stage, the helmet highlight looks a bit stronger than it actually is. At this stage I was still unsure how I wanted to handle doing metal for the army either with metallic paint which I would wash back to get rid of the shine or just paint them non-metallic using a dark grey  as a base and then follow it up with a light grey blue. I decided to go with the non-metallic option wanting to try something I had not before.

So I know this is a bit of a jump, but I did not take nearly enough pictures ounce I got into it. I know the shine from the low gloss varnish is coming off quite strong, but when they don’t have more normal lighting on them its a lot more subtle. I had the choice of 2 varnishes to use for the army either the low gloss that I went with or the no gloss that dulls the the colors on the models. Just another note I varnished the figures while they where still on there sticks.

The basing where to begin, so I originally started  with using chocolate brown (872 by Model Color) for the base rims, but after trying of it with Flat Earth (983) it was obvious it was the superior choice. Flat Earth had better contrast with the rest of the base and complemented the figures better.

The base soil was done with a black under coat, Chocolate Brown, Flat earth and a final light coat of a 50% Flat earth and 50% White. I considered doing a final much lighter color applied very lightly, but decided against it wanting to keep it quite dark.

So on the rest of the bases I have a lot going on, “Grass” flock by Games Work Shop, Brushes Medium Green by woodland Scenics, the foliage I believe to be German by the text on the bag and the wood from a dead plant in my back yard (I have collected more than enough to do the whole army and then some).

Any way that’s all I have for now; I will make sure to take more pictures, and will hopefully get around to put up more post about what I am up wargaming wise and more.

I know its been well over a week since I have done any painting, but today I did some. I have always been a fan of batch painting going back to when I first started war-gaming. The issue with batch painting 15mm scale figures (Flames of War figures) over Games Workshops 28mm scale figures is that batch painting them means your typically painting something like 39 figures (number of riflemen in a platoon) over some thing like 10 in a squad for warhammer. Where the issue arises for 15mm is the shear number that your painting at a time makes it easy to become absent minded, and missing parts of the figures. My way to combat this is to check over each stick ounce I think it’s done and then again after I have finished the whole platoon checking over every stick again with a new found energy knowing that I have nearly finished a color. 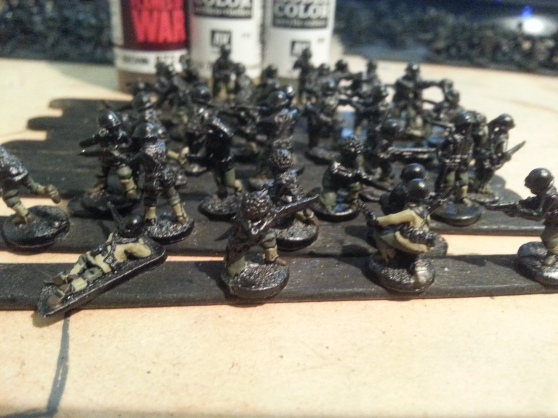 Really happy with how they are coming up so far. That said not having painted in so long my hands are not quite as steady as they use to be, so as a result some of the painting is not quite as neat as I would have liked it to been, but I can feel my brush control returning so at least from my second platoon onwards my figures should be up to the standard I’am hoping to achieve. I only did the jackets on 2 of the miniatures to test the paint order, and have discovered that I really need to do the sink before the jacket, so that’s what I am going to do next time I paint (hopefully less than a week from now). 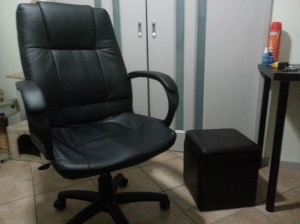 After starting on my computer chair I opted out for the stall.

Just a quick note on my working posture, so on my computer chair I was finding my self sitting to high over my figures and hunching over a lot so decided a switch out for the much lower stall putting the figures at a much more appropriate height. The moment I switched over I found my back feeling much better, and at a better height to work at.

That’s all for this for now Later.

Hey so I am only half delivering on what was promised with some painting and no battle report. Let me start with why I have no battle report. I did play a game of Dystopian wars today with my Kingdom of Britannia naval fleet, but with not having played the game since the previous addition of the rules I forgot to take any pictures of the game. That said I got crushed by a Prussian Fleet in 3 or 4 turns. Re-learnt just how brutal that game can be. Still had a good time. 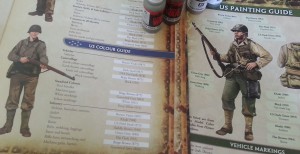 So I acutely went to start painting late last night, but when I went to compare the fresh paints I brought earlier that day to the American rifle color guide. I quickly became confused with the shirt color looking more like the pants color and the pants color looking more like the shirts and then I remembered the book me and the store owner looked in was for the late war therefore it was for the late war uniform. This left me at in a bit of an awkward potion with me making this army to be used for Mid war. Today after talking with some of the other guys I decided to just go with a late war paint scheme. 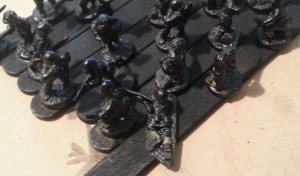 Not quite as neat as I want it to be but have not painted in a while.

Only done a little painting so far, the boots on 7 teams (1 team per stick) and the Anklets on one team. Would have gotten more done but I  got distracted and then tired so figured I would get this post up and go to bed. I will talk more to my methods and reasoning in future posts, but for now as you can kinda see is how I am trying to leave black in-between colors and in crevasse. Hope fully with a strong highlight on each color the models will have a lot of contrast. For now its nice the have started painting, just trying to think how much I still need to do before Cancon.

Any way I am done for tonight, coming up over the next week or I will look at putting together a bit of a painting guide and more progression pictures.